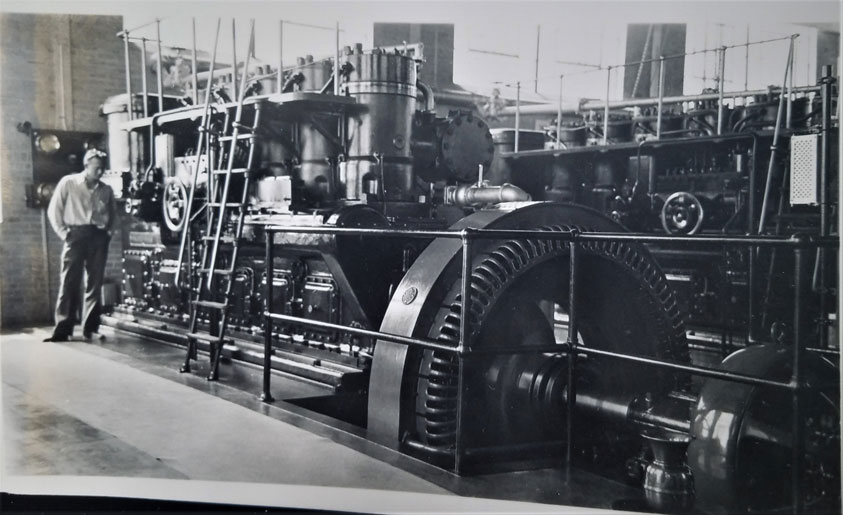 Diesel 2: A worker appears to be listening to the hum of Unit #One. A 450hp Fairbanks Morse Diesel Engine. Note the spittoon in the lower right.

When I first hired on to the City of Longmont Electric Department as a Groundman in 1972, the line crews and their equipment were working out of the old Diesel Plant building located at 3rd and Main, alongside the railroad tracks, next to the grain elevators and a packing plant on the south end of town. It was a solid brick building with lots of windows. Most of the floorplan was dedicated to one big room with a concrete floor and on the ceiling was a gantry style, five-ton overhead crane that could traverse the whole space. The room was large enough for us to park our two digger trucks, two bucket trucks and the service wagon and a few other vehicles inside. We also had a nice metal/ welding shop off in another room to the side, a remnant from when the diesels were operating. In fact, of the old operators, Mr. Burt Stephens, still worked in the metal shop fixing anything we broke. Like all of the old operators he was very hard of hearing because of working so long around the engines. They didn’t have the hearing protection of today.

Since those days, while visiting other towns in my part of the world (Front Range, Colorado) and even other parts of the country, I have noticed quite a few other old diesel plants (now repurposed or abandoned) that look very similar to the one we have here in town. They vary in size, but they all have a very similar plan and even the same kind of bricks sometimes. Once you know what a diesel plant looks like, they are easy to spot. They are usually located near to the rail yard (to facilitate delivery of diesel fuel by train car) in the old 1930s industrial part of a town.

For those that are not familiar with what a diesel plant is, it is an electric generating station powered by diesel engines now commonly called a genset or just ‘generator.’ From the beginning, the combination of an internal combustion engine spinning an electric generator has been a good idea and was developed and perfected for train locomotives in the mid-1920s. The reason for using a diesel engine to power an electric motor in locomotives was to replace the use of a mechanical clutch and transmission to control power output because a conventional clutch/transmission would be too massive to fit inside the eight foot, six inch wide locomotive. Most all train locomotives you see today (most people think of them as just diesels engines) are diesel over electric. In modern times, gen-sets are everywhere. Anyplace that can’t hook into the grid has them like for instance large cruise ships might have a half dozen of them for all the lights and motors. They are also used as backup for things like hospitals and other critical installations that cannot do without power and things like outdoor concerts not to mention the little generators sold at the hardware store.

Apparently, during the 1930’s, 40’s, and 50’s diesel fuel was cheap enough and the price of power from other sources high enough, that it was feasible for towns to build and operate their own generating stations. Looking in the newspaper archives I found a headline in the May 27th, 1931 edition of our local newspaper the Times Call proudly proclaiming CITY NOW SUPPLYING ALL OF ELECTRICITY NEEDED HERE and we no longer need to use Public Service ‘stand-by-power.’ The city had previously installed a hydroelectric plant in 1911 that could no longer keep up with demand. By the way, that old hydro plant has been maintained and refitted so there are no operators but, it is still spinning today!

Talk about a home-grown electric department, Longmont is one. We had some forward thinking ‘City Fathers’ who decided it was better to create their own ‘electric department’ and to build and maintain their own generation/ distribution system rather than let someone else do it. The information and pictures that allowed me to put this all together includes a 1951 spreadsheet that my friend and pole buddy, Dave Sherer inherited from his dad (and my foreman and personal hero), Slim Sherer who rescued these artifacts during the decommissioning of the plant in the late sixties. That spreadsheet put together all the pieces of the puzzle I have been wondering about for the past forty years. Thank you for the time capsule Slim! The last of the engines were sold in 1967. Legend has it that one of them is still powering a tugboat out in California. By the way, the reason that all the diesel plants look so much alike is because they were contracted to be built by the Fairbanks Morse Company. When purchased the power house came complete and fired up, right down to the spittoons.

After the electric department moved out of the building it was used by the trash department for a few years and then it became the museum archive for a time. The city finally sold the building and today it is home to one of my favorite family owned local business’s Cheese Importers with a huge selection of cheeses and anything to do with French food and culture, they also have a French bistro. 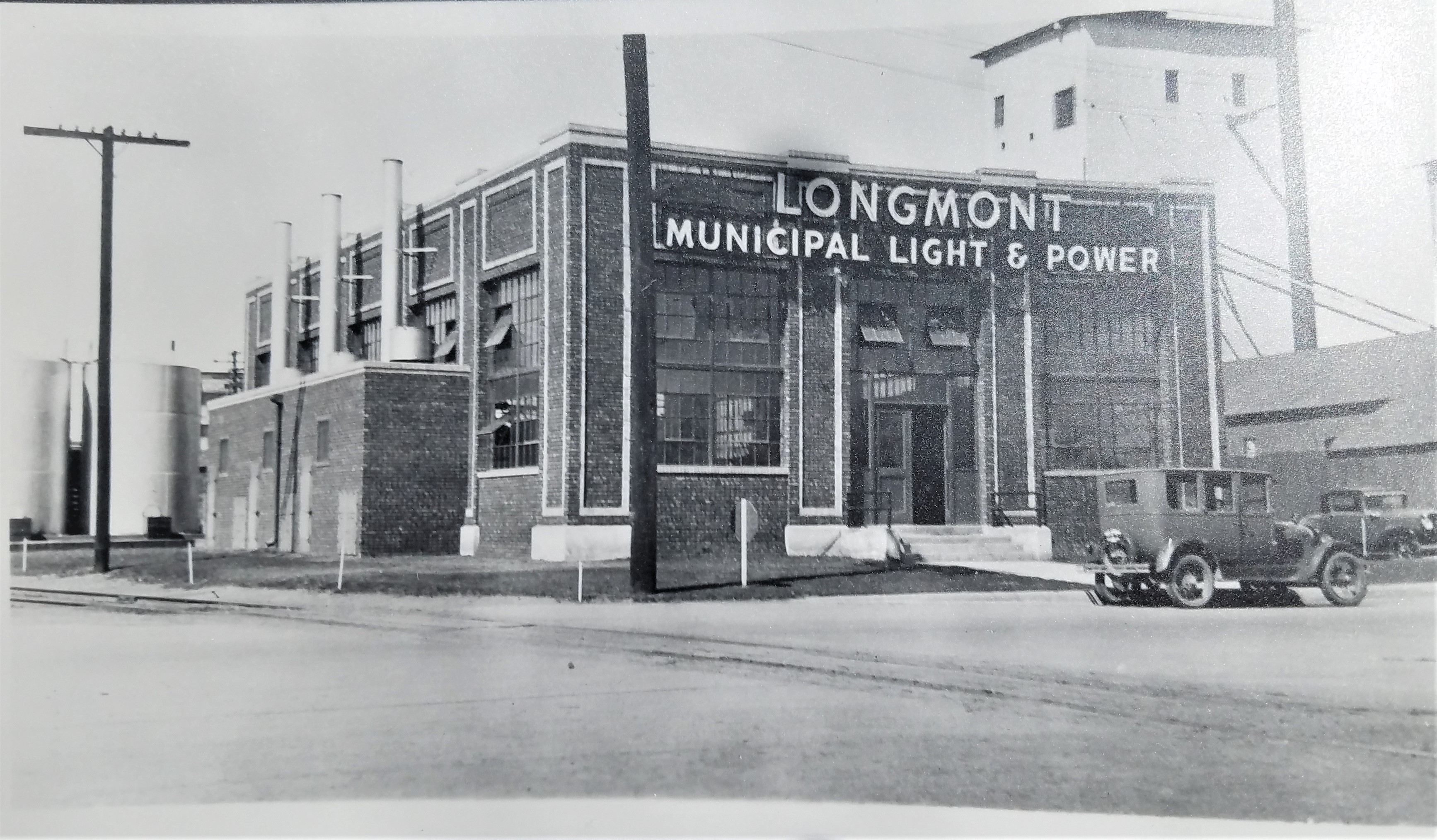 Notice the fuel tanks and exhaust stacks and the cars. Photo likey taken on “opening day” in 1931. 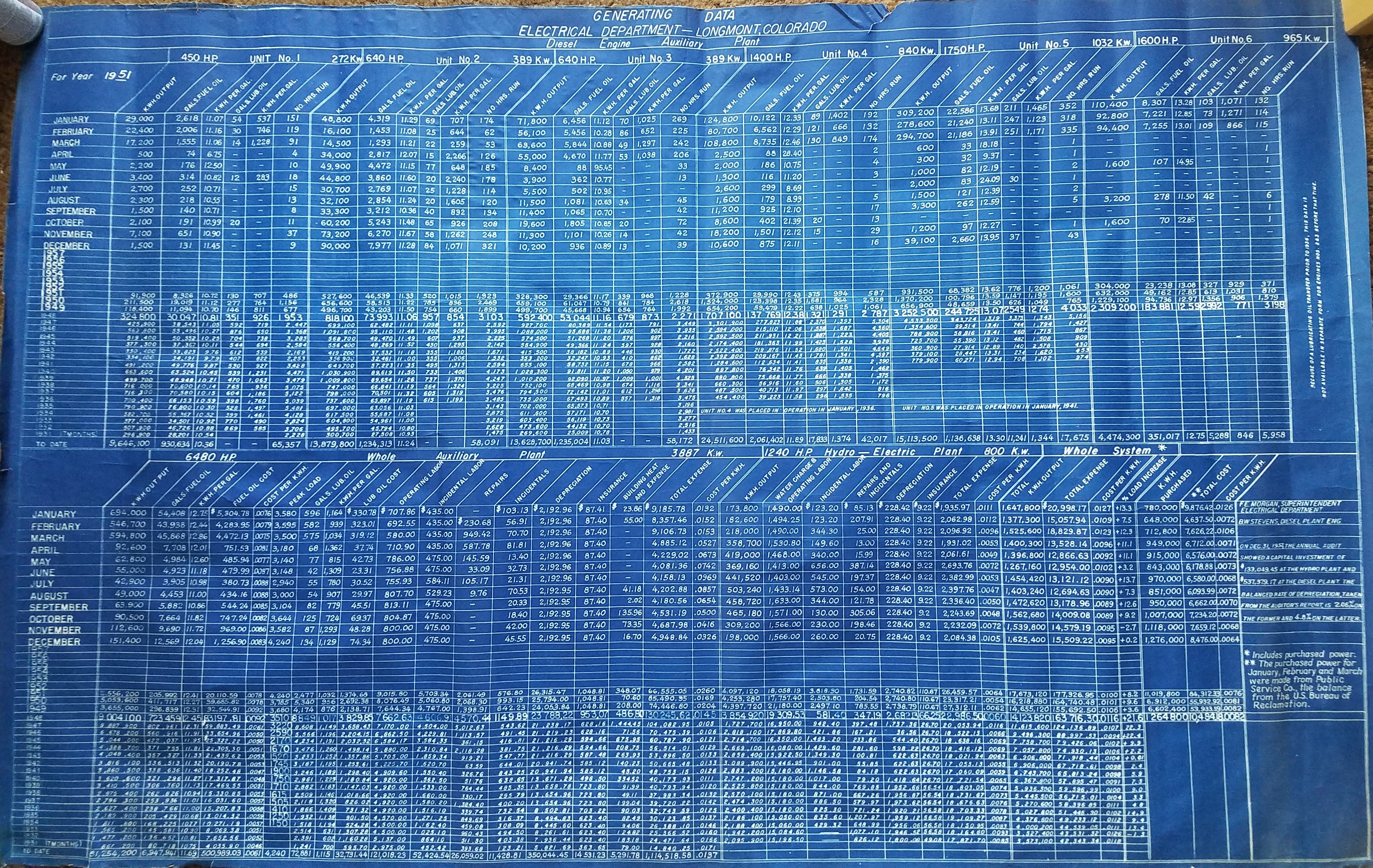 The spreadsheet image is the key to understanding what we are looking at in the pictures. It has all the dates and info. The spreadsheet is actually about two and a half by three feet wide. It shows the performance details of the whole plant plus the Hydro plant from 1931 to 1957. 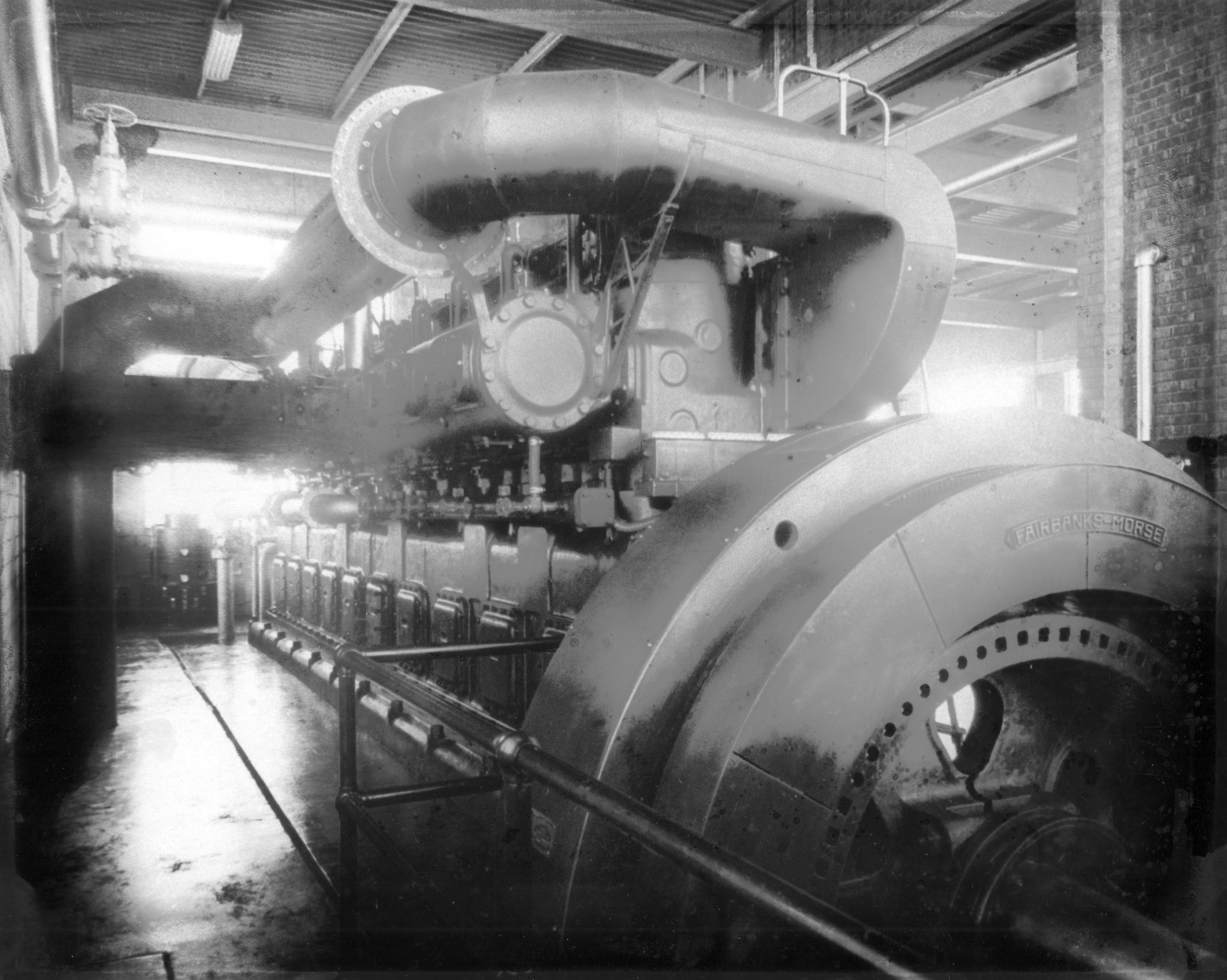 Photograph of the mighty 1750 hp Unit #5 that was placed in operation in January of 1941. The picture was probably taken the same day as the picture of the exterior. 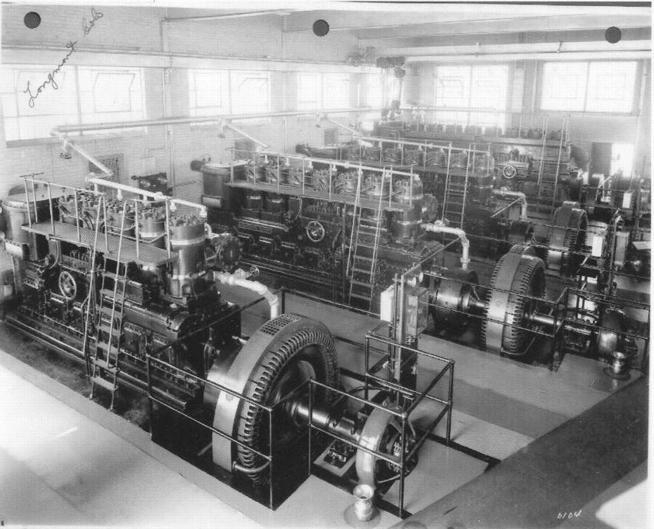 Photo shows units one through four. You can actually relate the size of the engines by counting the cylinders. For more horsepower you add more cylinders thus the bigger engine. Notice the five ton gantry crane parked up in the corner. 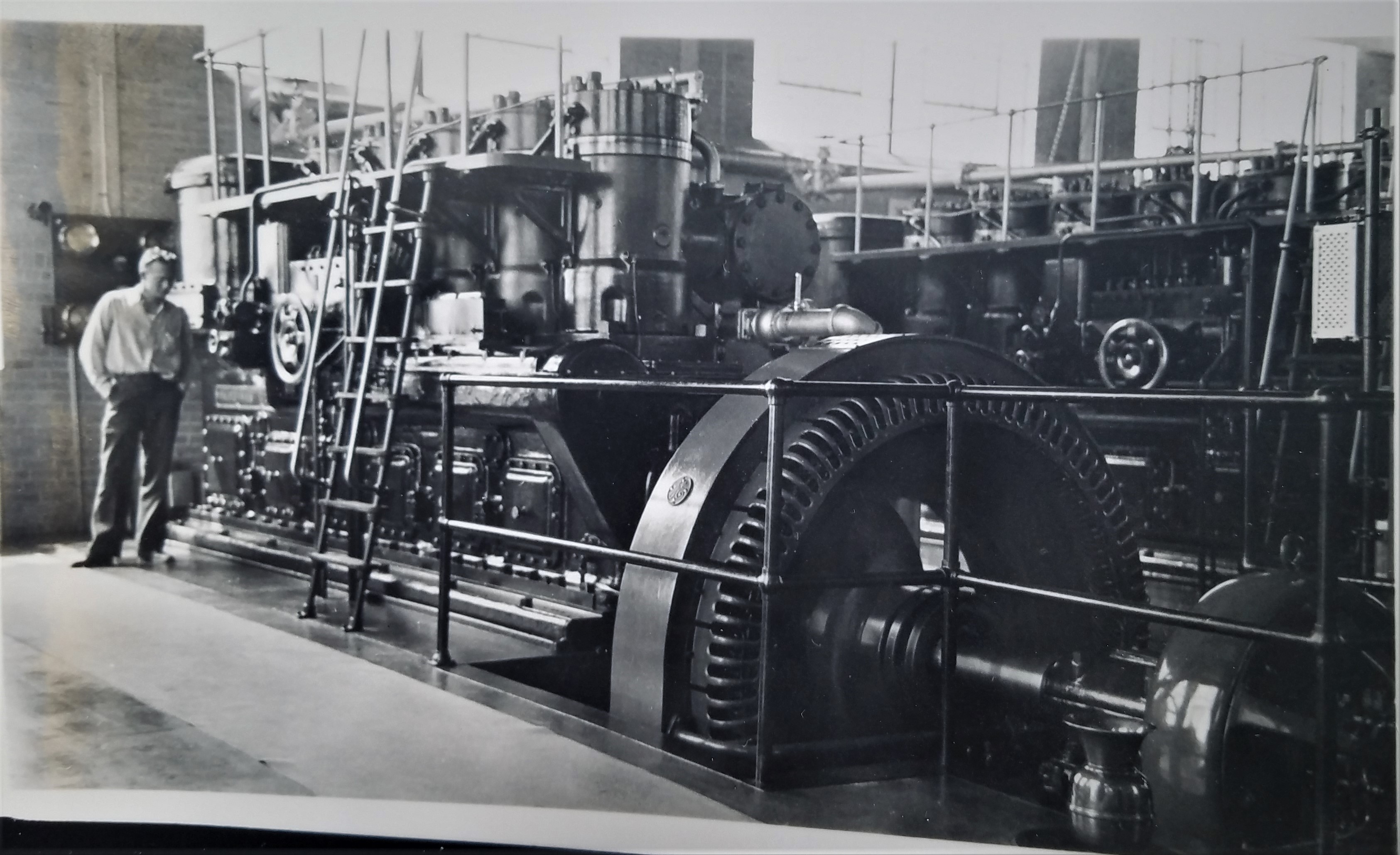