In the 1980’s there were some quality control issues with transformers causing them to explode.

The utility responded by creating a task force to investigate and come up with solutions. It was determined the first step was to address the problem with pretesting transformers before they were installed in the field. Second step was to get the manufacturer to improve welding on their tanks. Third was to make sure linemen maintained distance and use fault testing equipment.

The utility’s training department and corporate safety fortunately had a great photographer, Wayne Carlow, and access to a place called PowerTech Labs. In order to simulate the transformer explosions, we set up some photo shoots.We set up a few transformers that werealtered to create the explosion. They were real but controlled. High speed cameras were put in place to capture these events at 200 frames per second. The voltage was 14,000, the current was typical and the neutral conductors were larger for better control. The first ignition with the dummy lineman and bucket in place turned out to give us the perfect example. It blew the lid off and the oil ignited exactly as the faulty transformers had, or like an after being hit by lightning and reclosing on a fault.

Three transformers were destroyed and oil was spread around the poles for about fifty feet. The dummy was drenched in oil and the bucket needed steam cleaning.

The reason for the video was to teach linemen to maintain limits of approach well beyond normal, in case of failure. The other fault testing and Adman II or Extended Pole methods were highlighted and discussed in the film. There were other videos added to the safety training to teach linemen or women to consider their positioning in case of mechanical or electrical failures. The transformer task force had completed their task and the appropriate follow up corrected the problems. Linemen shared this photo for years and I noticed them hung up in line rooms as reminders.

A picture is worth a thousand words…… 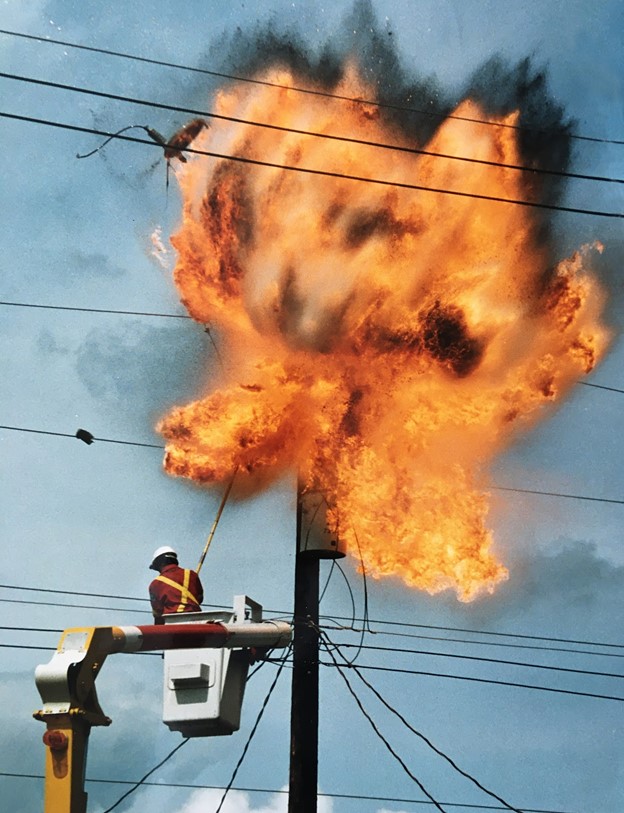