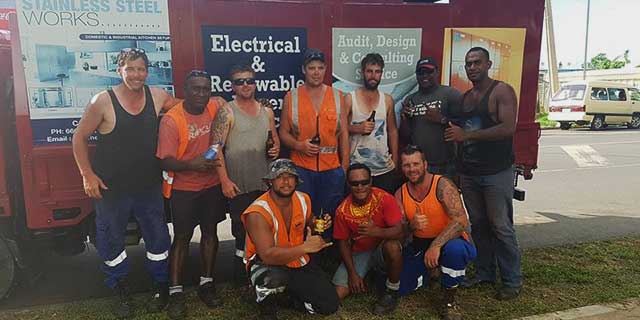 Well, I started in the industry when I was 17.  I had no idea what I was getting into but a teacher at my high school recommended it and thought I should apply for the role of a trainee lineman. She helped me create a CV and posted it for me to the company that was looking to hire. I had my interview but was told later that I did not get the job. However, a day later, they rang back and said the job was mine if I wanted it (the other guy who they offered it to was no longer interested).  So, I took it, and my journey began.  I have now been in the industry for around 20 years. Line work has taken me to other places around the world and I have seen sights only a select few people get to see. Currently, I am working as a trainer, passing on my skills and experiences to trainees. It is my hope to be able to help the next generation of lineman in New Zealand work safer and smarter. I also run the New Zealand Linemen Facebook and Instagram pages.  I set those up to get some exposure for the people working in the trade not only in New Zealand but around the world. It is always great to see people’s photos and read their comments and stories.

Has it been a smooth road? If not, what were some of the struggles along the way? Any advice for other men, particularly young men who are just starting their journey?

What would anything be without adversity, “a smooth sea never made a skilled sailor.” I have thoroughly enjoyed my journey and I am who I am because of it. Yep, there have been bumps on the road along the way but that is how you learn. I was lucky enough that when I started, the guys I worked with instilled in me, not only their skills and knowledge but also a hardworking and competitive attitude. And I suppose that is where the advice starts, the journey is going to be filled with ups and downs but, remember that everyone before you have had those as well. It is part of the journey. At the time it may not seem like it, but the downs teach you the most. My advice for anyone starting in the industry is this, turn up every day. I do not mean turn up to work every day, whether you are sick or injured. What I mean is, if you turn up to work, turn up ready to go. Your focus while you are there is to get better than you were the day before, which could be, simply learning something new, something that you did not know the previous day. At the end of the day, what you invest into it, is what you get out of it.

We would love to learn more about your work. What do you do, what do you specialize in, what are you known for, etc. What are you most proud of, either work wise or in life? What sets you apart from others?

Well, as I said I am a fulltime trainer now, for MITA Consulting here in New Zealand. We specialize in training linemen and cable jointers, but we do not limit ourselves to just that training either. How it works in New Zealand is this, you get taken on by a company as a trainee lineman and you get enrolled into a training program.  Over the course of 2-2.5 years, you complete module courses, normally every 6 months, where you get signed off on certain skills and practices. After your final examination you get issued with your New Zealand Lineman registration.

The journey as a trainer is quite a rewarding one, you get to see the trainees from day 1 and watch them progress through to becoming fully fledged lineman.  I have recently gotten my live line trainers’ approval which gives me the opportunity to help train the next generation of live line workers in New Zealand as well. Being a Live Line trainer is something that I have always wanted to do.  I am glad that I got the opportunity with MITA Consulting to achieve my goal. What am I most proud of?  It is the friends and relationships that I have made along the way. The lineman community, though worldwide, is, at the same time, small and to me some of the people in it have become like family to me.

I do not necessarily think that there are all that many obstacles.  One thing is that rules and regulations (health and safety) are forever changing and advancing. So, you always need to remain up to date with current rules and legislation. I think the industry is in a good place now. We are seeing more females join and that is great for the trade. Maybe the biggest thing at moment would be Covid, as it has made it more difficult to gain work overseas, as lineman can be quite the movers. I do think in time that that will change and hopefully we will go back to what it was like pre covid.

It would have to be this, it is not so much crazy, maybe more interesting or funny. A few years ago, I used to work with a foreman, who will remain unnamed. We were working on a farm, building a new 11kv line. I was drilling some crossarms when, in the distance, I see the farmer heading towards us on a quad bike. I decided to stop drilling and walked towards a fence, which separated two fields (and the farmer and us) to greet him. The foreman sees this, and he pushed me out of the way, so he could be the one to talk to the farmer. As he brushed past me, he was rolling up his sleeves so he could have a good chat with the farmer. The farmer stopped his quad bike and before he could say “Hello”, the foreman leaned into and grabbed the fence with both hands. However, the fence was electric, not just any type of electric fence, it was a bull fence, so it carried quite a whack. He dropped to the ground with a groan. The farmer and I looked at each other and tried not to laugh. However, the foreman tried to continue like nothing had happened. As he was trying to get up, he was using the fence wire to pull himself up to his feet. He grabbed the fence again and once again fell in a big heap. Now this time the farmer and I could not hold ourselves in anymore. I literally was crying with laughter and so was the farmer. The farmer just looked at us and decided we were not worth talking to and drove off again.

Who are some of the linemen that you know and admire? Is there anyone that has influenced you? We will check out their work and be incredibly grateful to you for bringing them to our attention. 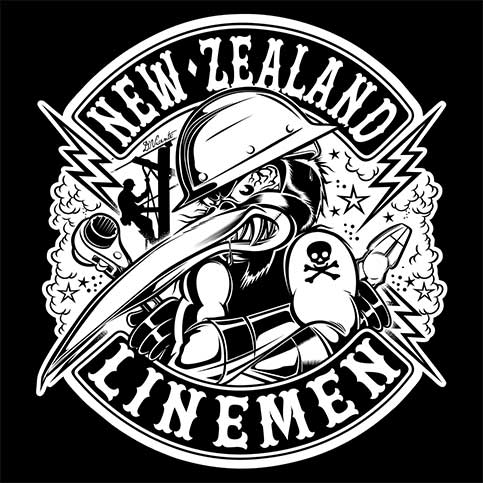 There is a guy I looked up and wanted to emulate.  His name is Rhys Millar. When I first started, all the guys use to talk about him, how good he was, how well he could do the job, how quick and easy he would make things look. So, he became the guy I wanted to work with.  I wanted to be as good a lineman as he was and receive the same level of respect. Of course, he never actually knew that I admired him or how much it meant to me when he would complement me on things that I had done well.

Rhys has basically been around my whole career. I first met him when I was trainee. I was surprised that he was not a giant like I had built up in my head. Later, when I got qualified, I changed companies so I would have the opportunity to work firsthand with him. Over the years he taught me so much, and he was always ready to lend an ear if I had any problems. Later, he became my supervisor and I, his foreman.  We made a good team and completed some challenging projects. So, thank you Rhys, for everything.