Do any of us know what it is about certain things that draw us in? Whether it be a person, event or an idea, what is it, particularly, that makes us act. I am not talking angrily, I mean in a positive way.

Why is it that the homeless guy at the stop light gets nothing while the another sitting outside the grocery store get a few bucks; the broken down car on the side of the highway gets hardly a glance while another makes us spin a U-turn and head back to assist or that one tragedy provokes an outpouring of grief and spurs a mass urge to volunteer while others fade away with the days of the week.

In our line of work, we know what we will be doing when the emergency strikes. Why, because it’s what we do (our adrenaline starts to pump, we are needed and we know that there is money to be made)! But, this discussion falls outside the boundaries of work; it deals with humanity, our nature.

I am not sure it can be easily explained but…there is…always something…that grabs us and causes a desire…a need…a want to be involved, to help.

Several years ago, I wrote an article for this magazine that talked about the need for our profession to support one another and to promote recognition of our craft. I am happy to say that there are groups and organizations out there that are dedicated to this. One needs only to read this quarterly, which for the past decade has and continues to support the trade(“for linemen by linemen”), to learn of organizations such as the National Association of Journey Linemen (NAJL) and the International Linemen’s Museum or log on to social media sites such as Facebook to realize that such groups exist.

Which leads me to the subject of this story, the National Sisterhood United for Journeymen Linemen (NSUJL). I happened upon this group, several months ago, while “surfing the net” and checking out some upcoming rodeos. I am not sure what it was that made me take notice; it could have been their logo (there was something familiar about it); it may have been the web page for the rodeo (NSUJL Lineman’s Benefit Rodeo). Perhaps, it was their mission (assisting families of fallen and injured linemen). But there was something that made me take notice. 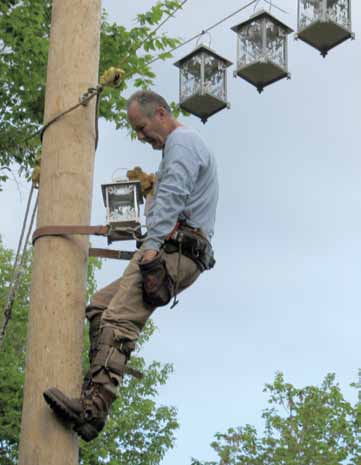 It began several years ago as a discussion among a diverse group who shared a common bond, that of being the wives of linemen. These conversations which began on the IBEW Wives Facebook page evolved into friendships that stretched across the country. This social media camaraderie allowed them to exchange information of common interest and concern that each faced in their everyday life. Being family members of the line community, this included the good and bad news of the high voltage profession.

In January 2012, John Plante, an IBEW lineman in Maine, was killed when he fell from the pole he was working on, despite wearing a fall restraint belt. The news spread throughout the line community, including the Wives’ group. This death struck a chord and the friends decided they wanted to do something to help. Initially, the idea was to start a fundraising effort to support organizations in place for this type of occurrence. To their dismay, none existed.

None? There are countless charities out there to assist all types of tragedies but not one for the families affected by the violent and abrupt accidents that our profession deals with. And so, this loose-knit band of friends turned their frustration into action and formed the National Sisterhood United for Journeymen Linemen.

Today, the NSUJL is a certified 501(c) 3 non-profit organization dedicated to providing assistance to families of lost/injured IBEW Journeyman Linemen and Apprentice Linemen. For legal reasons, and to ensure proper dispersal of donations, they concentrate their efforts for IBEW Union members. There are now 144 members and they continue to grow. Since they are the result of social media interaction, they aren’t restricted by regional constraints. Much like the folks that they support, the NSUJL team is located throughout the country. In order to be able to address the needs wherever they may be, they have divided the country up into six (6) regions.

This year, the NSUJL held its’ first rodeo, a benefit with the proceeds going to help those families in need. The competition which drew teams from all over the United States was held on the grounds of Blue Knob State Park outside of Altoona in central Pennsylvania. The site, a scenic spot located just off the Eastern Continental Divide, is home to Global Live Line training, a primary sponsor, whose students helped to prepare the rodeo grounds.

The contest which enlisted an impressive list of sponsors was staged through the efforts of Rachel Johnson and team members Jessica Lackey, Jennifer Novak and Sandy Larsen. They, in collaboration with their sponsors and the help of the dedicated volunteers set in motion what they hope will be the first of many competitive experiences.

It was interesting to sit and talk with these women and get their perspective on life in the line community. Each of them, with the exception of Ms. Larsen, who is an IBEW representative with NV Energy in Las Vegas, is married to IBEW linemen and have young families. They expressed the importance they placed on being able to offer support and assistance to others knowing that they could be in the same position at any given time. The viewpoint was reminiscent of my wife’s who many years ago had reminded me of the dangerous work that I was involved in. It is a sentiment that many of us do not consider as we belt up or clip in “on the way” to work.

Their mission is not restricted to providing financial assistance alone; they are committed to lending emotional support, providing meals or whatever the family may need to help it get through. The organization also works to provide scholarships to qualified applicants. According to Ms. Johnson, the Founder and President,” It is gratifying to be able to help someone meet the monthly expenses.”

The two-day event began on Friday evening and featured the Climbing for Lost Linemen memorial, followed by a BBQ. The tournament of skills was held on Saturday with an awards presentation and a social to close it out. The contest included four (4) matches for both the Apprentices and Journeymen.

The Climbing for Lost Linemen memorial was chronicled last summer (Powerlineman Magazine, Summer 2012; Vol.10, Issue 3). It was started in 2011 by Leticia Messley, a Missouri woman with a family pedigree in line work and a wish to honor those linemen who had paid the ultimate price. The first event was held in August that year and honored nineteen (19) journeymen. In 2012, she passed the baton on to the emerging NSUJL. 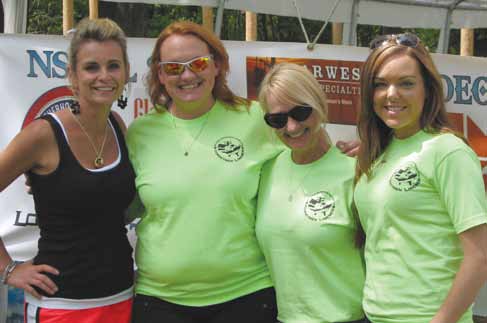 This year’s commemoration honored sixteen (16) fallen comrades. As the late spring sun began to set, select Rodeo participants made a climb to affix inscribed lanterns to a hand line stretched between two poles. The first to be attached bore the name of John Plante. It was a time of reflection for those who had passed, and to exchange stories and experiences that is normal when like clans get together. As darkness settled in, the lantern’s flickered to life in fitting tribute.

The location and weather conditions were ideal that Saturday. There were seven teams of journeymen and nine apprentices representing various participating locals. They came from California, Connecticut, Indiana, Illinois and Pennsylvania, to name a few. The events included competitions found at most rodeos (i.e. speed climb, hurt man rescue, cross-arm change-out) along with an obstacle climb, knot and splice match.

The contests were staffed and judged by volunteers from participating organizations. The audience was a blend of family, friends, coworkers, IBEW and industry officials, as well as a handful of veterans who never quite lost an enthusiasm forth trade, me being one of them.

The day began slowly due to the usual delays that come with a first time experience. Once in motion, though, the matches were carried out in a skillful manner, pitting the competitor’s talents against, not only their opponents but their own professional pride. At the end of the day, the Apprentices from Local42 and Journeymen from Hot Line Construction had bested their opponents and were proclaimed the overall winners.

As rodeos go, this event was small in comparison to October’s International Lineman’s Rodeo but, in terms of heart, it doesn’t get much bigger. It was a time for families, good-natured competition, meeting new friends and renewing old friendships. And like its’ parent organization, it’s just getting started.

As Rachel Johnson said that first evening, “It was Facebook that made it happen.”