The "Art" of Linework 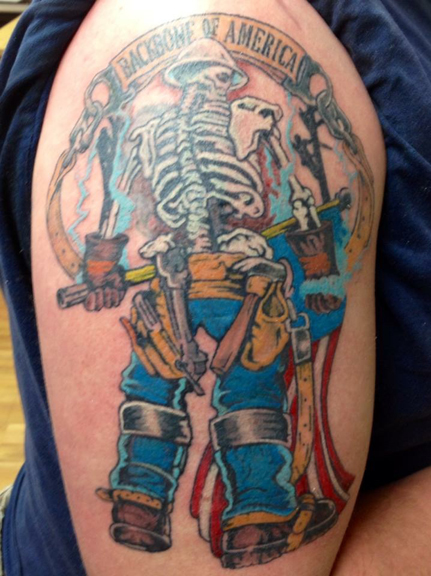 I came to the game late.   I knew so many that had joined the ranks earlier.  And though I was witness to their involvement, and had some admiration for it, I really didn’t have an interest….until.

My first exposure to it was when I was a kid.  During the warm summer months when tee shirts or short sleeves were the order of the day, our next door neighbor – a New York City cop - displayed his membership.

Interesting!  I wasn't sure what it to make of it.  My father called it a tattoo, saying that a lot of guys in the service hadgotten them and, without getting into specifics,  said that it was something that many of them regretted the day after.  My dad had been around, he was a lineman and a Navy vet (World War II).  But he, like so many of his generation, believed that tattoos were a source of embarrassment  and not to be displayed proudly.

Although, at one time, largely associated with soldiers, sailors and ne'er do wells,  for a long period the practice was quite fashionable among the upper class, even royalty.  It has been around for centuries - the explorer ,Captain James Cook has been credited with introducing the concept to western civilization in the 18th Century - with recent findings dating back to long before the time of Christ.

Since the 1970's, the practice has steadily become more "mainstream", depending on your perspective and , of course, who is showing them. As the practice became more popular, more artists got involved with the vocation and provided a greater range of designs.  They can be as simple as a small image on someone's ankle to....well, does anything really need to be said here.  Musicians, models, movie stars, athletes...mothers, fathers, grandparents - people of all types - have them.  They are a statement...or a whim.... of who we are  or what we think.

Throughout my time in this profession, there has always been someone who had a tattoo.  Some were veterans, others bikers, 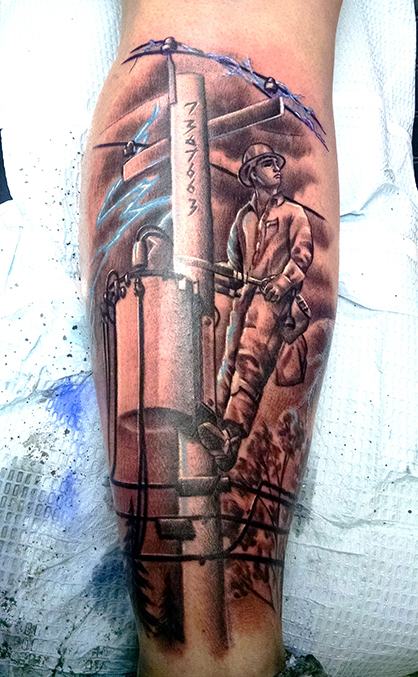 punk/grunge/hardcore rockers or the afore mentioned fringe element types.  Nothing like it is today and to my knowledge no one that wore their trade on their body.  In those days, you would be hard pressed to find a lineman tee shirt, let alone tattoos.

This changed several years later when a couple of troubleshooters showed me their tattoos which were different depictions  of their department's logo.  I was impressed, not only by the art work, but with their willingness to display their personal  pride in this manner.

Years later, some of us would talk about them at work.  By this time, many of the young linemen and coworkers were sporting  an impressive array of body art.  For the most part it seemed to be more thought than action on our part, after all we were the " experienced in life " veterans.

One of the group, Neal, had  already gotten his "ink" after surviving  a serious health crisis. Another, Al, spoke about getting a "lineman" tattoo. Hmmm! Of all the displays that we had seen come through, there was only one  that we could remember  that dealt with line work.

There was a rendering that I kept on the cover of my personal memo book that I always felt would be perfect for the occasion.  It was unique (and would be my statement).  I had it for years but wasn’t sure that it would ever happen.

The idea for this feature was the result of a chance encounter with a friend.  I was out at the APPA Rodeo in Sacramento last May.  Wandering around the competition grounds, I stopped to watch one of the contests.  As I took in the event, I realized that the team looked very familiar. In the hotel lounge later that evening,  I looked over and saw my friend, Chuck and his " familiar looking" Mishawaka Utilities  team.  We passed the night discussing a variety of things that are common to our trade, including tattoos.  Chuck suggested that this magazine should do a piece on line tattoos.  Interesting!  It was a theme that I had considered but his input was a call to action.

For several months, ideas and feedback have been solicited on different levels to gather information on the subject.  It is not always easy to get individuals to reply to requests. However, I was fortunate to have a good number of people send in their photos.  To these folks,  I am very grateful.

Their submissions are presented here for you to see.  We are involved with a craft that has a long, distinguished and proud history.  How you choose to evoke the "art" of line work is a personal choice.

And me.... well, I finally took the plunge several years ago.  I had my "statement" tattooed on my  right calf, followed later by another on my left calf.  Neither one is "line" art but rather a reflection of my passions, my family and a tribute to my brother.