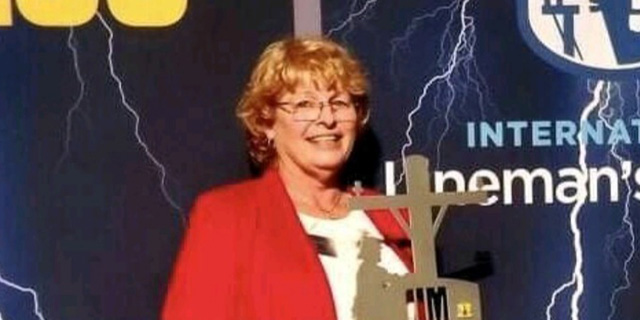 I came out of meter reading in 1989 to start the lineman apprenticeship at Evergy (KCPL). It wasn’t an easy decision to make. I met a lineman out in the field that told me that if I wanted to become a “lineman,” he would teach me. His name was Billy Prince. Unfortunately, I never got to work with Billy. He died in a work accident before I ever got to be on his crew. He saw in me that I could accomplish journeyman status, so I worked to make sure his belief was honored.

I completed the apprenticeship in 1992 and became the first female Journeyman lineman at Evergy (KCPL) and in the state of Missouri.

I spent ten years in the field before going into training. In 2008 I had the opportunity to come over to Metropolitan Community College and teach the Lineman Program.

I brought in some of the best trainers that I had, during my apprenticeship, to create a number one program in the area. We offer over 200 years of experience, between us. Old school to the newer generation.

Has it been a smooth road? If not, what were some of the struggles along the way? Any advice for other women (or men), particularly those young folks who are just starting their journey?

It was not a smooth road. I think that for most of my career, it was under construction. In some utilities, and contractors, that statement still would remain true.

I was the first. They really didn’t know what to do with me. On top of that, I had two pregnancies during my apprenticeship. That was really hard for everyone to navigate.

It wasn’t the work; anything can be rigged. Lessons can be learned. For me, it was the fact that my coworkers looked at me as a female and not just as another apprentice or journeyman. I just wanted to be treated the same as the males. It took a long time for me to realize that women shouldn’t be treated the same, they simply aren’t the same. But they should be shown the same respect. I worked as hard (if not harder) to earn my Journeyman card. That is a level of respect that is not just given but is well earned.

We may not all be six feet tall and 180lbs, but we can still get the work done. We may not have the same strength but just give us a minute and we will figure out how we’re going to accomplish the task. Don’t just assume that we can’t.

Women should have gloves, boots, FR clothing that is made for a female. Their own locker room with benches (for all females), make accommodations for the fact we will need access to a restroom out on a job site. I didn’t ask for any of that. I just wanted to blend in. I eventually realized that I would never “blend in.” But companies can make those things available. It is the least a company can do to make the women feel that they have a place in their workforce.

Some advice. Believe in yourself. Do not take it personal, some people will always be assholes. Work hard, show up, show up early. Always be respectful, no matter how you are treated. Find your mentors. Those whose opinions matter to you. Then let the rest of them go.

We would love to learn more about your work. What do you do, what do you specialize in, what are you known for, etc. What are you most proud of, either work wise or in life? What sets you apart from others?

I am the Lineman Program Coordinator at Metropolitan Community College in Kansas City, Missouri. We teach men and women how to safely perform line work in the field. We spend 85% of our time outside on the poles. They learn the basics in construction and de-construction off the pole.

What am I known for…being a hard ass. I have a level of expectation that I hold our students to. If this a career that they want to spend a lifetime in, they are going to start out with a high bar. I know, in the end, they all appreciate the fact that we push them to be the best that they can be.

Most proud of? Inducted into the International Lineman Museum Hall of Fame 2021. As you go through life as a lineman, you should pass on your knowledge to the next generation, teach those that may lack the fundamental skills in the field, and support and mentor others. We should give the next generation the confidence and knowledge to go out into a high-risk profession, work safely, and perform their tasks with little to no involvement with grave consequences.

We are our brothers’ and sisters’ keeper. I have always tried to live my adult life helping others achieve success in the line industry. To be that mentor that does not judge or cuss you, but lets you learn and thrive. I am teaching this generation for the next generation and all those after. We need to be the best that we can be for them, to make sure they are safe for their families and the industry. Being recognized for something that you have such passion and dedication for is humbling.

Sets me apart…well I am a female Journeyman. Few of us around. lol

Safety…Lineman basics. We have lost so much knowledge over the last few decades. Much of what used to be common practice, has been lost. That is what we try to enforce in our lineman program. Safe work practices to keep you safe throughout your careers.

I was on a pole in the property line. It was early in the morning. I looked up and the house in the yard had a large window on the second story. The homeowner had put the glass in backwards. So, I could see clearly into the shower. Well…then came the man into the shower. My lead told me to get off the pole…lol.

Who are some of the linemen that you know and admire? Is there anyone that has influenced you? We will check out their work and be incredibly grateful to you for bringing them to our attention.

I often felt as though I was drowning, and I needed something to change. So, after years of struggling, doubting, and crying, I started to navigate through the waters better and found mentors. Men that were well respected and treated me with respect. I let go of "everyone's "opinion and only listened to them. If they said I had a good day, I knew I was on track and doing well. It started with very few. Then I realized that they were all around me. They were the majority, not the minority. So, when I reached out…they helped. It was like they were there the entire time, just waiting for me to reach that point to see and appreciate what they had to offer. They all played a role in changing my outlook on life and the company. They helped me understand that I had no control over what people would say or do to me. The naysayers had no impact on my personal life or my paycheck. They would have their opinion, no matter what I said or did. My focus was better suited elsewhere in life. To enjoy the everyday accomplishments and enjoy the benefits that I had laid out in front of me.

I went on the training crew after making Journeyman with Rich Erickson and Rich Haynik. Those two never had a bad day. They didn't spend their time worrying about people that didn't deserve the time. I felt safe with them. For a small moment in my career, I was safe. Treated as an equal, and my opinion was encouraged and respected. They took the time to get to know me. Not judge me, gossip about me, talk behind my back but truly know my family and me. I became a valued member of the training team. They pulled me out of a dark hole and set me on a new path in my career. It took me years, but I learned a lot of life lessons. I could see (and now feel) what it meant to have a strong will. A will stronger than a man's will to take what you wanted, needed, and had sacrificed to achieve.

Others that influenced who am today are: Ben Blaser (husband and Journeyman Lineman)

Billy Prince (he died before I got to work with him. He is the one that told me to come into linework and he would “teach me how to be a great lineman.”