SAFETY ARTICLE: ‘Ask, Commit, and Follow-up’ Can Prevent Most Accidents 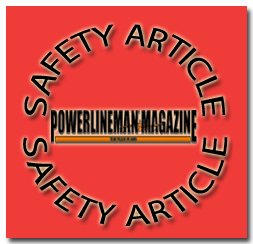 I have worked in the electrical line for 45 years in many roles, but none more rewarding and impactful as the Director of the Fallen Linemen Organization (FLO). Since our beginning in April 2013, the electrical line industry has lost over 110 linemen. For every one lost, we estimate 3 to 4 times that number have been impacted by life altering injuries. The topic that has impacted me the most in my position at FLO has been safety. I always considered safety as of the utmost importance, but I did not take the time  to research what safety really meant. Watching families suffer after they have lost a loved one really makes me think, “How can I help make a difference?” Being in a hospital room with a lineman that realizes that, while he is lucky to be alive, he will never climb a pole again. These instances have motivated me to learn more about safety and the culture of safety in our industry.

Through my experiences and research, I have created some ideas to help lead to our goal NO MORE FALLEN LINEMEN.

The Cooperatives have a National Safety Program called “Speak Up/Listen Up” that can be applied to most accidents. It basically has 3 questions which can be used in most situations: Ask, Commit, and Follow-Up. The following are accidents that are routine and ended in tragedy. SCENERIO: It is a hot summer day in August. The sun is beaming down and you are in a hurry to get to the job. You do not air test your gloves today because you are in a hurry and they look fine. You had the high side jumper of a transformer that you were going to energize up against you, when a blanket fell off of a top circuit phase. You grabbed the phase with your rubber glove, not realizing there was a pin hole in it. This small mistake results in a loss of life as you make contact with the grounded jumper against your body.

How can you prevent this incident? You, as the designated observer, ASK: I didn’t see you air test your gloves. Commit: Do you want me to test them while you get your other gear on? Follow up: The gloves had a pin-hole. You get another pair of gloves and, with this simple task, you have contributed to keeping that lineman safe.

SCENERIO: Lineman gets to work to discover his bucket has engine problems. He has to get the spare truck, which is an older truck that has not been used in a while. You are his fellow lineman and you notice him in the truck doing his pretrip DOT truck inspection, which is not effective. ASK: Why are you doing a pretrip in the truck without a true inspection? COMMIT: Offer to help and during the inspection you find 4 lug nuts missing on the driver side rear tires. FOLLOW UP: You turn it in as a Near Miss and possibly prevented a bad accident. Unfortunately, it was never asked! The lineman headed down the road and both rear driver side tires came off. He overturned the truck, and he was not wearing his seatbelt. This resulted in his ejection and he was killed. There are two simple lessons here: First, ALWAYS wear your seat belt. Second, ALWAYS do a proper pre-trip inspection, and if you see someone failing to do these simple tasks, ASK, COMMIT, FOLLOW UP.

SCENERIO: There is a 7-man crew with 3 journeymen linemen, each with over 17 years of experience. It’s peak summer in Florida, and they’re changing out a double circuit pole. After lunch, one of the lineman decided it was too hot to wear his sleeves. He went to work and made phase to ground contact and was killed. Inadequate cover added to the already poor situation. Can you imagine if he was your pole buddy and you didn’t say anything about not wearing his sleeves as was required? You have to live with the fact that you didn’t speak up. How about the designated observer watching from the ground that didn’t warn him about his cover or his lack of PPE? If his fellow lineman had ASKED: Do you feel good about your cover? I see some gaps. COMMIT: Let me add a couple more blankets or, if you are too hot, I have my sleeves on, I will take your place. FOLLOW UP: A true act of “brother’s keeper.”

SCENERIO: A five man crew is changing out single phase tangent poles. This is routine and the crew had changed out many in last few days. This particular day one lineman’s his pole buddy was off for the day. This pole had a transformer. This particular contractor didn’t have a cradle to cradle rubber glove policy. The lineman was connecting the secondary side of the transformer with his leather gloves. He then took an armor rod to install on the primary. He failed to put his rubber gloves on. He made contact with the ground wire and the primary and was killed. No one ASKED who the designated observer was. No one COMMITTED to be an extra set of eyes. The Follow up was a funeral with a wife and two small children.

SCENERIO: Another five man crew is heading to the job and taking their time because of rainy conditions. There is a flat on a trailer. They stop on the side of the road in a rural area in front of a famer’s house. The lead sets the digger truck on the side of the trailer to use the winch to lift the trailer. The foreman goes to talk with the farmer, while the lead supervises the tire change. The other three crew members watch as the lead places the hook directly under the frame, without a sling or chain. As the operator lifts the trailer, with the lead in the line of fire, the hook slips off, hits the lead in the head. The lead eventually dies a few days later, leaving behind a wife and five kids. No one on the crew Asked about using a sling, no one Committed to get a sling. The Follow up was prayers in the intensive care. All of these scenarios are true stories. Our lack of follow through on safety is a much greater danger than the actual electricity. Obviously, when a linemen in in the primary zone, the designated observer is key and required by OSHA. Something as simple as SPEAKING UP can prevent most accidents in our industry. Creating a culture where everyone feels compelled to speak up has to have a culture of listening. When someone asks a question, thank them for their concern.

One suggestion to promote a questioning culture is using what I call, fire drills. It is a situation prior to any critical step to create heightened awareness. The lineman goes to do his task; he purposely leaves a necessary blanket off and asks his designated observer how is his cover? If the observer says it looks fine, he is reprimanded by the lineman for not having his back. The next time he asks, he won’t know if he is being tested. As a supervisor, I would purposely not wear my safety glasses when I approached a crew to see if someone will say something to me. If nothing is said, I would ask if they care about my safety because they did not question me when I was being unsafe. Any situation that doesn’t compromise safety, but creates an atmosphere of full attention and awareness of every critical behavior promote a brothers’ keeper culture.
Another way to change the safety culture at your company is the use of post job briefings. You listed the hazards and steps to mitigate the hazard in your pre job briefing. After the task is completed, bring the crew together and review the briefing. Was all the critical steps listed and the steps to mitigate followed? Was anything missed in the initial briefing, or did any situation change during the procedure? The post review can be a tool to improve on the pre job briefing and possibly record good catches or near misses. The post briefing can be a tool to improve other crews’ briefings and heighten overall awareness.

I am an advocate of Human Performance, and it has to start at the top. The root causes of these accidents could be the lackadaisical safety culture allowed by management. Are inspections of PPE required, monitored, and reinforced? Does management have a random check of pretrip inspections or a plan to randomly assist? Are job briefings followed and, if needed, altered? Does any crew member feel compelled to halt the job? If safety is a value, there can be no compromise. From the CEO to the foreman, if you let it go just this one time or just until we finish the rush job, you have changed a value to a priority, and that makes safety a convenience. You also make the unwanted behavior acceptable and routine. Luck buckets are out there and eventually will run out.

Fallen Linemen Organization is a non-profit that was created to help the families of fallen and severely injured electrical line workers. And while that is our main goal, we have evolved to realize the importance in spreading a message of safety throughout this industry. The only people who can change the safety culture are those in the industry and it starts with YOU! Remember, you are your brother’s keeper and because you SPEAK UP and LISTEN UP, you have helped those around you go home safely.